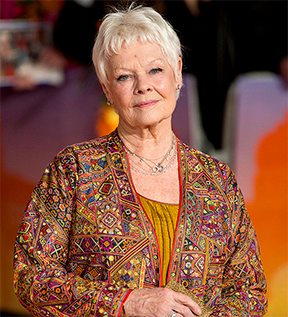 From People Magazine March 7, 2015 - She has been a big star for decades and is accustomed to being the main female lead in movies.

But sometimes Dame Judi Dench, 80, has much bigger scripts than her costars for another reason – her eyesight.

Dench, who revealed in 2012 that she suffers from macular degeneration that can lead to blindness, says that she has the typeface enlarged so she can read scripts.

"So, if six of us were coming in to read a sonnet they'd all have one piece of paper and I'd have two or three," she tells PEOPLE in the magazine's new issue.

Chuckling, she adds, "They'd think, 'why does she have a bigger part?' when it's all the same!

"While a diagnosis of Age Related Macular Degeneration (AMD) can be devastating, like Judy, with proper diagnoses and treatment, you can still do the things you love.