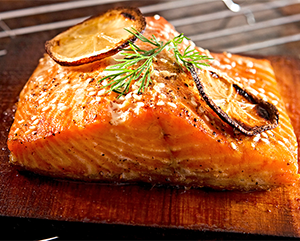 You may want salmon, mackerel, herring or tuna on your menu at least once a week if you want to reduce your risk for age-related macular degneration (AMD).

Researchers at Brigham and Women's Hospital and Harvard Medical School followed up on 38,022 women during the 10 years after data had been collected on them for the Women's Health Study.

Low Vision Optometrists who are members of the International Academy of Low Vision Specialists are trained to assist those with vision loss in a variety of ways including nutritional counseling. They agree with the study, having one or more servings of fish per week produced a 42 percent lower risk of AMD, compared with less than one serving per month. Canned tuna and dark-meat fish were the primary types of fish that produced this lower risk.

The omega-6 fatty acids linoleic acid and arachidonic acid were also evaluated. Higher intake of linoleic acid, found in many fruit and vegetable oils such as safflower oil, grapeseed oil and corn oil, was associated with a higher risk of AMD, but not significantly so.

If you are unsure what to take, how much to take or how ofter, consult contact the International Academy of Low Vision Specialists today to find a Low Vision Optometrist in your area and schedule a phone consultation.

Where is the Macula