Contrast sensitivity (CS) clinical testing has great value that can enhance any Optometry practice. Unfortunately, however, contrast sensitivity testing has been relatively ignored since developed over 30 years ago. It has been perceived as having little clinical relevance, too time consuming, and difficult to administer. None of this is true. It can be very valuable and easily done in about 1 minute!

The aging population, that was predicted over 25 years ago, has finally arrived in the primary care, as well as specialty practices such as low vision. “The graying of America” has also resulted in an increase in the management of cases that involve serious clinical decision making. Understanding and simplifying contrast sensitivity will not only enhance your practice but provide the expertise in helping to manage patients, as well as reaching a quick and beneficial case disposition.

My career has been fortunately enhanced, more than once, by “serendipity.” None has affected me more than a “chance” introduction to Arthur Ginsburg, PhD, in the 1980’s. USAF Maj. Ginsburg was heading up the Wright Air Force Base vision laboratory that was involved in a space shuttle mission and an experiment cloaked in secrecy. He was mysteriously working on a way, other than the standard Snellen chart (designed in 1862), to “realistically” measure vision. As eyecare clinicians know, the standard Snellen chart requires the identification of high contrast letters. That is, black letters on a white background. Visual acuity is therefore a measurement of vision under near ideal contrast levels (100% contrast). But even the jet pilots, with 20/20 vision, who became astronauts, did not see the same, especially under varying conditions of changes in the contrast of letters and objects. 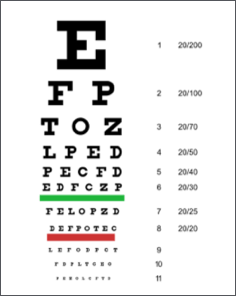 Ginsberg had developed a chart to simulate everyday visual conditions encountered in our environment. He and others wrote an article: “Contrast sensitivity predicts pilot performance in aircraft simulators”.1

He sensed a real opportunity to bring “contrast sensitivity” down to earth to predict why visual performance in persons is different even though visual acuity seemed normal. But he also perceived that a specialized test could successfully detect functional vision loss, often caused by early eye disease such as cataracts or early macular degeneration. Ginsberg felt that CS testing provided a more sensitive and comprehensive measurement of capability and performance than that provided by the Snellen test.

Here are two examples that Optometry plays a role in reducing serious injury, as well as even death. According to the Centers for Disease Control:

How can we as Optometrists be at the forefront in providing advice to reduce the risks to serious injury? Visual acuity and visual field have provided significant information in helping make important decisions in driving. But many patients have difficulty in seeing highway signs or staying in their lane when driving or walking down a flight of stairs that is not always understood. In the Low Vision world, low vision optometrists have often been confused as to why we can’t improve the reading ability of a 20/40 patient.

Contrast sensitivity is often the defining factor in determining whether there is an increased risk of falling or if driving has become hazardous to others as well as themselves.

After over 30 years of contrast sensitivity testing, I have tried many different CSF charts. I finally settled on the MARS contrast sensitivity test because it is easy to administer and takes less than 1 minute to test the right and left eye. The test has 48 letters of decreasing contrast, with 6 letters on each line. The first letter is 100% contrast (a black letter on a white background). Each letter gets lighter incrementally (0.4 log units – but it is easier to think of each getting lighter by 4%). The letters gradually disappear. Generally, patients experience difficulty functioning when they can’t achieve at least 25 letters. 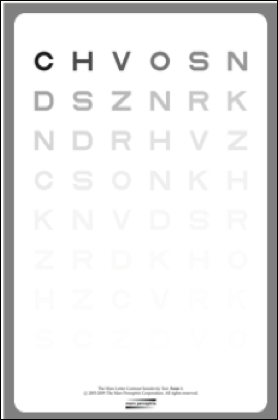 Contrast sensitivity is far more a factor in safe driving than visual acuity. With loss of contrast, even in the face of decent visual acuity, one should consider discontinuing driving. This is a difficult and serious discussion for any clinician requiring compassion and emphasis on the safety of others. 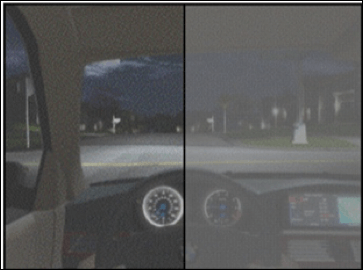 In summary, contrast sensitivity will add another dimension to the uniqueness of a practice, as well as help patients and families understand how vision loss can affect one’s quality of life. For clinicians, it can provide insight as to which patients can be managed successfully in their practice and which should be triaged for further care, such as one specializing in low vision.