An individual who was a true “pioneer”, mentor, innovator, teacher, and friend in every sense of the word, Eleanor Eaton Faye, MD, passed away on January 7, 2020, one month shy of her 97th birthday. Dr. Faye influenced most of our career paths, as well as the way we practice. She was also a powerful influence in changing the perception of those individuals having “subnormal” vision, with the publication of her first book in 1970 named: “The Low Vision Patient: Clinical Experiences with Adults and Children”.

Baby Eleanor was born in Berkeley, California on February 15, 1923. She was actually raised in Hawaii but returned to California to obtain her undergraduate and medical degree at Stanford University. She began her ophthalmologic training at a time when it was difficult for a woman to be an ophthalmologist.

Dr. Faye started her career at Manhattan Eye, Ear, Nose, and Throat. She began questioning the standard approach to vision impairment, which was to “save” vision as much as possible. She left that facility to begin a life-long career at The Lighthouse, The New York Association for the Blind. Being mentored by Gerald Fonda, MD, and in collaboration with the Lighthouse, and The Industrial Home for the Blind in the early 1950s, Dr. Faye established the first rehabilitation centers for those with vision loss. These centers promoted the use of remaining vision, an innovative approach.

Becoming the first of her profession to become a medical director of an organization for the blind and visually impaired, Dr. Faye was appointed to Medical Director in 1966.

Eleanor Faye paved the way for many others during her lifetime. Personally, this author (Richard Shuldiner) has always been grateful to Dr. Faye for listening to a proposal from a newly minted low vision optometrist for the establishment of low vision clinics in the Mid-Hudson Valley of New York. It was 1980, and she (and her assistant, Claire Hood, RN) drove up to White Plains at the request of a very young and frightful OD from Poughkeepsie. After my 20-minute presentation, she nodded her head and said, “let’s do it”. I was invited to work with her assistant, Ms. Hood, in Manhattan to create the clinics. I became Clinical Director of Upstate Clinics for the New York Lighthouse.

However, she wasn’t finished with me. She persuaded me (rather persistently) to apply and complete the Low Vision Diplomate program of The Academy. Reluctantly, I agreed and am thankful for her support as well as other diplomates (Drs. Jay Cohen, Wayne Hoeft, Bruce Rosenthal, Paul Freeman, and Alan Fried) for mentoring me through the process.

After moving to California in 1993 and creating a new model for low vision in private practice as well as founding The International Academy of Low Vision Specialists (2006), she congratulated me on “still making a difference”.

The bringing together of the professions of optometry and ophthalmology was one of Dr. Faye’s major career achievements. In fact, when we (Dr. Rosenthal, Dr. Faye and others) lectured in Israel to 100+ ophthalmologists with 5 optometrists in the room, it was said that “it was more difficult to get these two eye professions together than the Israelis and the Palestinians”.

A symposium was arranged to celebrate the twentieth anniversary of the Lighthouse Low Vision Service in 1973. This was followed with the publication of the symposium titled: LOW VISION. The opening sentence in the DEDICATION read: To ophthalmologists and optometrists. This simple phrase was a milestone as the first recognition and mention of both ophthalmology and optometry working together in a common professional area. The symposium included both MDs and ODs on the program, another groundbreaking milestone.

Shortly thereafter a film that Dr. Faye wrote, “NOT WITHOUT SIGHT”, was premiered at Lincoln Center. It told the story of how five visual impaired individuals might see with age-related macular degeneration, glaucoma, cataract, diabetic retinopathy, and retinitis pigmentosa. Dr. Faye made sure that her simulations were placed in the public domain for all to use, including the NEI.

Another first for Optometry as well as the Lighthouse: I (Dr. Rosenthal), wrote a letter following the symposium to Dr. Faye asking if my interns from SUNY Optometry’s first graduating class could observe patients. Within a few weeks, the interns were observing me evaluate low vision patients at the Lighthouse. Dr. Faye announced to the clinical staff that optometrists would be teaching and becoming part of the clinical staff. They could leave if they wanted. A few MDs left but about 6 stayed on.

Dr. Faye committed her life to the “low vision” approach to vision impairment. It is thought that she was the first to coin the term “low vision” as a replacement for “subnormal vision”.

Eleanor Faye was conferred a Doctor of Science degree from the State University of New York (1991), received the Distinguished Service Award from the American Optometric Association (1994), was named Honorary Fellow of the American Academy of Optometry (1994), and received the Statesmanship Award conferred by the Joint Commission on Allied Health Personnel in Ophthalmology (1995). In July 1996, Eleanor Faye was awarded the International Meritorious Award for Lifetime Contribution to Low Vision by AER, the Association for the Education and Rehabilitation of Blind and Visually Impaired Persons. She shared the 1981 Pisart Vision Award with Louise Sloan, MD. Dr. Faye is a member of the Hall of Fame: Leaders and Legends of the Blindness Field.

One of the many things those in low vision have admired about her was that while she held her views firmly, she was open to having them changed. If she held a view on a particular topic, she had her reasons for doing so clearly in mind. If you wanted to change her view, you had to have better evidence than she did. Yet, she was always open to rationally discussing different viewpoints, even those expressed by young researchers. She recognized good clinical skills in others, regardless of their degrees. Whether it was an OD, PhD, OT, O&M, or other background, she was satisfied as long as the patient truly benefited. This was a quality that she had in common with other truly great people in any field.

Eleanor also had the utmost modesty about her achievements and was always open to learning new things from her colleagues, a trait common to the great leaders in history. 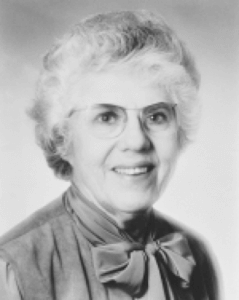